Today’s sketch is from Freshly Made Sketches, and is linked to their blog for their most current challenge! {Which ends in just  a few hours!!} 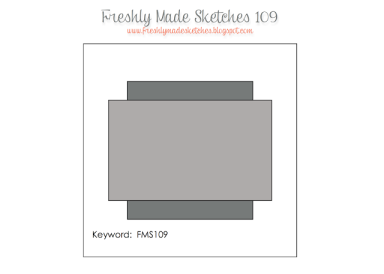 Here is my card:

Starting with a white cardstock base I added an oblong layer of Olive Cardstock. The trees come from the Workshop On The Go® Frosted Cardmaking Kit and are stamped using Olive Exclusive Ink® using the first and second generation stamping technique. Using a sponge dauber I grazed the edge of the White Daisy Cardstock.

The sentiment and banner come from the stamp set that is included in the Seasons Tweeting Gift Bag Kit from the Holidays From The Heart Gift Guide.

And as you can see above the stamp set includes an adorable owl image and the sentiment reads, “Happy Owlidays”. Because I didn’t use an owl on this card the sentiment wouldn’t have made much sense, so I cut out an individual “H” and “O” to make the sentiment what I needed it to be. I added 3D Foam Tape behind the sentiment for it to pop off my card.  I also added 4 sparkles from the Clear Sparkle Assortment Pack.

To give the card a little more shimmer I also used White Daisy {Pigment} Exclusive Ink® on the snowflake dots {also from the Workshops On The Go® Frosted Cardmaking Kit} and Clear Detail Embossing Powder to create the gleam of snow falling.

I know it’s only the end of October, but with all the Christmas cards I’ve been making lately it’s really starting to put me into the Christmas spirit! I may have to put my Christmas tree up early this year!!!

4 thoughts on “Freshly Made Sketches”